HOW TO CHOOSE THE UKULELE

In the construction of the ukulele, the woods used can be laminated (more sheets of wood glued together) or solid (made from a single piece of wood). The laminated wood offers lower prices and higher resistance, but is less resonant and the tone is poorer. So solid woods are used for higher quality ukuleles, as for the majority of other musical instruments.

Generally speaking, the most important elements we must take into account when choosing solid or laminated wood are:

Tone and resonance (solid wood is clearly superior if beyond entry level performances are needed, at least for the soundboard)
Applications (for an instrument often used outdoor, that travels frequently, bottom and sides made of laminated wood can be preferable for their strength)
Budget (solid woods are more expensive)

Let’s take a look at the woods used for the different parts of the instrument:

For the soundboard (or top): light and resistant woods are used, to increase the propagation of sound thanks to their elasticity and ability to resist to the string tension without deformations. The most frequently used woods for the tops are: mahogany, koa, spruce, cedar.
For the bottom and sides: hard and dense woods are preferred, in order to reflect and contain the sound in the soundbox without dispersions. The most frequently used woods are: mahogany, koa, maple and rosewood.

For the neck: the woods used must be able to resist to the string tension. The most common woods are mahogany and maple.
For soundboard and bridge: rosewood and ebony are used (for the high quality models), very hard and stable woods.

Now we can take a closer look to the characteristics of each wood we mentioned above:

Mahogany
Aesthetically has a typical red colour, sometimes with valuable figures. The sound is sweet and focused on the mid frequencies. It is a relatively light and resistant wood.

Rosewood
It is a valuable and expensive wood (especially the Brazilian one), very strong and heavy. This translates in a warm and rounded sound, together wit a long sustain. Especially beautiful, with noticeable grain and brownish coloured.

The Indian rosewood, less valuable than the Brazilian one for availability reasons (but sonically equivalent or even superior) shows more porosity, a darker colour, and less noticeable grain, that looks more even and parallel.

Spruce
It is highly resonant, and has a well balanced and bright tone. Usually light coloured, the sound improves over the time, as spruce wood changes during the life of the instrument.

Cedar
Cedar sounds more rounded, softer and warmer than the spruce, that on the other hand offers a more opened and brighter tone, with more definition and loudness. That’s why we say “cedar is for the players and the spruce is for the listeners”. Moreover cedar does not change with the passing of time, consequently its tonal qualities will not improve during the life of the instrument as often happens with spruce (according to someone, cedar looses part of its global richness, but this is not always the case). Aesthetically, the difference between spruce and cedar is obvious, the latter being darker and reddish. Broadly speaking, who is looking for a more aggressive sound can usually prefer the spruce, but this is true only if other construction feature are the same.

Maple
It is a beautiful wood, with its many aesthetically appealing variances. As maple highlights the higher frequencies in the spectrum, it is often employed to balance those instruments that would otherwise sound too rich in the low end. Moreover, maple offers a beautiful aesthetical addition to any instrument, thanks to its many figures, like quilted, flamed, tiger, bird’s eye, curly, or spalted. 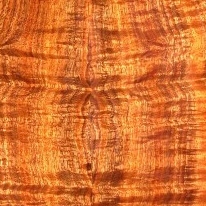 Koa
The Koa (Acacia koa) is an exotic wood from Hawaii. Combines the sonic qualities of the mahogany and the rosewood, together with more brightness. As the maple, this wood can offer beautiful figures, and represents a good choice for high quality ukuleles. 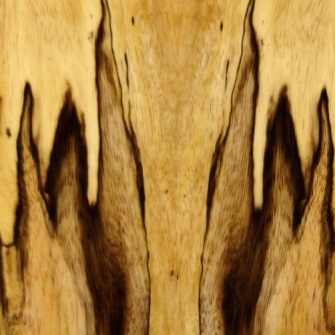 Mango
The Mango, originally from India, it has always been used for the ukulele: in fact its diffusion keeps the costs down, while its sonic and physical qualities (hardness and density) make it especially suitable for the construction of acoustic instruments. The large variety of figures increases the possibility of use. 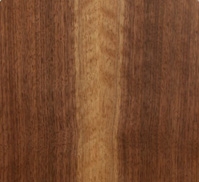 Walnut
It is a dense and rather heavy wood, with tonal qualities similar to the maple, but with less emphasized high frequency than the latter. Aesthetically very pleasant, with noticeable figures in different shades of brown.

Ebony
It is a very dense, heavy and compact wood, extremely dark coloured and without grain, so valuable and expensive that is used only for fretboards and finishing.